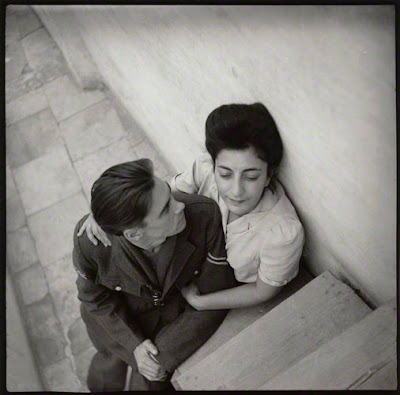 © National Portrait Gallery, London
Years before Jack Kerouac﻿ wrote 'On the Road' or any of the other Beats explored Eastern philosophy, W. Somerset Maugham wrote 'The Razor's Edge,' a complex novel about Larry, a survivor of The Great War searching for some sort of enlightenment in his life.  So complex, in fact, that I feared I wouldn't be able to do it justice.  I know I won't, but I'll do my best.  And to kill two birds with one stone, a comparison to it's critically acclaimed film will be made.
The novel spans twenty years, from post-Great War to the writer's completion in the 1940's.  Maugham casts himself as the narrator, which I found marvelously clever.  He tells us about Larry, a boy changed after a near death experience in the War.  He returns to Isabel, his former love interest, a vain society girl and decides he'd rather travel the world and 'loaf.'  Isabel's Uncle Elliot -an American-born, Parisian social climber- naturally disapproves of it all.  She then marries Gray, a stockbroker making it big on the 1920's American economic boom.  Then finally he tells us the tragic tale of Sophie, an old friend of Isabel, Gray and Larry.

Because of the quantity of characters I shall only go into the few that stuck with me (and stuck with me they did...I read the book when I first got to Italy, months ago).  The story is mostly based around Larry; who he effects and the consequences he causes.  He decides he wants to leave regular life in Chicago and travel the world.  First the Left Bank and the rest of Europe, then on to the Himalayas.  No one knows where he is, but everyone still thinks of him.  While I was reading it, I kept thinking of my friend John White.  He's always known as John White.  Is he living above the cinema in Brooklyn?  Is he in Upstate New York?  Wait, isn't he homelessly living in Paris?  No, I thought he was working at Purple Magazine?  Larry caused the same flutter.  Especially when he miraculously would rise from the ether.  Which is why I really hated Tyrone Power as Larry.  He was too "Gee-Golly"/post-war/optimistic American.  "Garsh, I just can't wait to see the sights o' the world!" his performance said.  They needed someone a bit more pensive, melancholy and gritty.  Thankfully he was the only one poorly cast.

Onto Uncle Elliot.  Vain, shallow, desperate for the approval of those who matter and a terrible snob.  I absolutely loved him.  He was born in the Midwest, but managed to fool (I think) everyone into believing he was someone more than he was.  Later in life he even managed receiving a title from a distant ancestor.  Clifton Webb portrayed him p.e.r.f.e.c.t.l.y.   Maybe because he was so much like Elliot himself. Born in Indiana, gradually making his way up through Vaudeville, Broadway and onto Hollywood stardom, his climb up the ladder of success was parallel to Elliot's.

Sophie, helplessly in love with her husband and child.  They were the perfect family until a tragic accident kills both husband and child.  Sophie is left helpless and her perfect life twists into a dangerous one of addiction and sorrow.  Larry comes in here, but for those of you who haven't read 'A Razor's Edge' I won't go on, for your sake and mine, lest I tear up.  But Anne Baxter surprised me with her Sophie.  I'm moved often with old film, but never do I find myself sobbing.  Her acting was unbelievable, and such a turn from what I've seen her in before.
I hope I did 'A Razor's Edge' justice.  It's my second Maugham, but I loved it so much more then 'Of Human Bondage.'  I recently found 'A Moon and Sixpence' which I'll delve into shortly.  I think I've found yet another author for me to adore.  I think you will too.

Note on image above:  I recently found out about Ida Kar by recommendation of A Pile of Leaves.  I felt her portraits of artists and bohemians of the forties and fifties tied in beautifully with the characters Larry would have bonded with.  Take a look!  Thank you, Nick!
Posted by DM at 1:00 AM

while adding it to my netflix queue (of human bondage has been on the list for a while now), i noticed that there's a bill murray version (1884)...

Without question one of my absolute favorite books -- you must read "Theater," too.

Sarah- Bette davis was kind of painful in OHB, but its worth it. I saw the bill murray version but he couldn't possibly be a good Larry! I won't be happy until I find a good one.

Nick- Will our tastes ever cease to be similar!?

I'm with Nick - one of my all time favorites!! I adore Maugham - although The Razor's Edge is my favorite, you will love A Moon and Sixpence as well.

I have read and collected the works of Somerset Maugham for several years now. Few writers of fiction has had more impact on my life than Maugham.

You have an excellent blog by the way, I'll read it through and follow it.

Best Regards from a Swede in Tallinn!

La Sombra Sofisticada- Maugham has such an impact with whoever reads him, I fell. So glad you found my blog! I look forward to reading yours as well.
Sidenote: always wanted to go to Estonia AND Sweden.