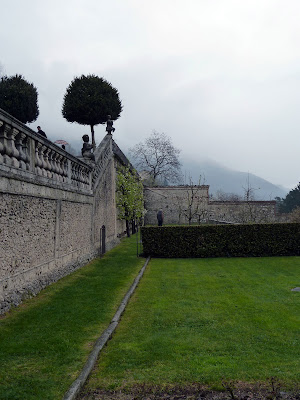 Like the Landmark or National Trust in England, Italy has FAI, which restores grand villas throughout Italy and opens them to the public.  Sunday was the day where they were all open for free, so we visited Villa della Porta Bozzolo near Varese.  The weather was a bit overcast but it made for rather Gothic looking photographs. 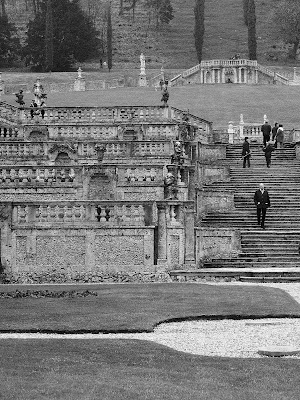 In the 17th century the land was owned by an average farming family until the landlord married a wealthy Milanese woman and he built the villa and grounds up to what they are today.  If you want names, mi dispiace. You should be impressed I got that much, the tour was given by teenage Italian volunteers. 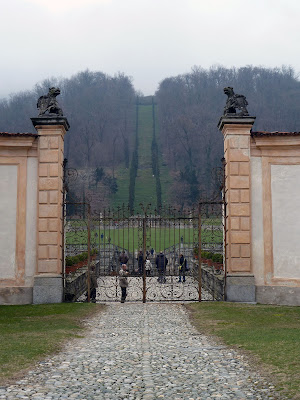 On the side of that pathway climbing the hill is a the largest lawn of violets in Italy.  I think I'll make a pilgrimage in a few weeks when they are in bloom.  I hear it's breathtaking... 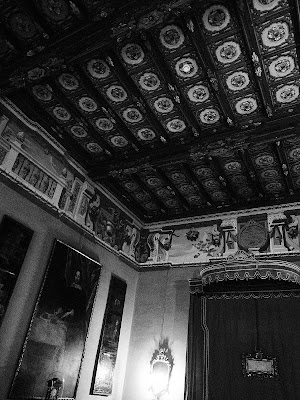 The ceiling in my apartment is wooden like this.  I wonder if my landlady will let me attempt painting it like this?
The house that is in 'Io Sono Amore' is part of the FAI and a friend of a friend of a friend is a tourguide there!  So expect and update soon, spero.
Posted by DM at 9:03 AM

Your photographs are perfectly ethereal! the second I especially love in black and white- just right out of time-is it?
Gaye

i wait with bated breath for the violets!

Beautiful villa. I'm so glad that you're having a grand time on your Grand Tour.

SO beautiful - both the villa and your exquisite photographs! And clearly your Italian is improving rapidly!!

Your photos bring to life magical moments from my youth. Grazie mille.