Another Self - James Lees-Milne

My ongoing ﻿obsession with Tom Mitford, the little-known brother of the famed Mitfords, has led me to James Lees-Milne.  Mitford and Lees-Milne were great chums at Eton and Lees-Milne's tales of visiting the family's home, adds to their history.  What he is most known for, though, is basically saving a great part of England's history and architecture with his work for the National Trust.  During his years there, he convinced many who owned these great homes but couldn't afford to keep them up, to donate them to the Landmark Trust so they wouldn't fall to ruin. 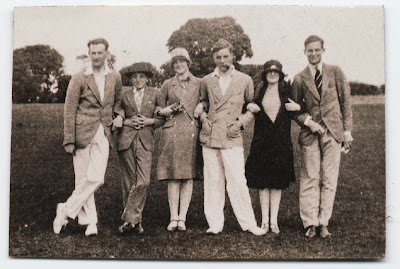 
Which lead me to read Another Self, the memoir of his early years.  Looking to just find some more information on Tom Mitford, I have instead found a book and a new author I absolutely adore.  On the same vein as Beverley Nichols, he writes as a close friend would, telling you the personal, witty stories that make it impossible not to admire him. 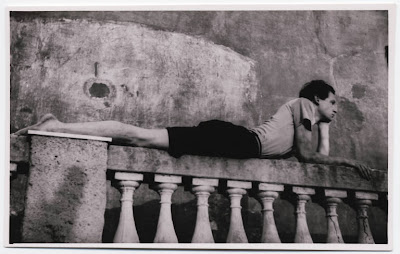 James Lees-Milne at Posillipo
One comical story regals his time when working as secretary for the future Prime Minister, Lord Lloyd. He took a holiday (paid by Lloyd) to Corsica where he spent weeks dashing about the island with a Corsican bandit named Dominique, who threatened death upon himself with a machete to the neck at a moment's notice.  They spent nights travelling and days sleeping in caves all in the quest to find the corrupt Spada, Lord over all the bandits.   After this tempestuous trip his return to reality was not a simple as one would think:
"On leaving Corsica I took a boat from Bastia to Spezia to stay with the Lloyds in an isolated villa which they had rented from Percy Lubbocks near Lerici.  My disillusion with the ferocious Spada was not so absolute that I did not still identify myself with the Corsican bandits.  I could think of little else, and my recent experiences were magnified into fears of dare-devilry that were scarcely justified.  Moreover I arrived at the the Lloyds' respectable house-party dressed in my bandit outfit, that is to say in a 'costume de chasse en velours bleu.' Round my waist I wore a wide scarlet sash with tasselled fringe, and attached to it the sheathed knife which Dominque had pressed upon me at parting in return for money to buy himself the revolver...I quickly realized that I was making an ass of myself and conformed to the clothing expected of a private secretary in 1933 even on the Mediterranean."
Who of us hasn't been there?
My personal favorite was the night when he was 17 and dirt poor in London, but decided to splurge on a gift from his mother and go to the Opera.  There he met, in the standing section, the seraphic Theo and the two quickly became fast friends.  At the night's end after walking around London, the two parted and exchanged their contact information on pieces of paper.  Elated he walks home and just before he turns in, checks the paper. "James Lees-Milne.  14 Onslow Gardens."  He spent the rest of his life searching for that Theodore or Theophilus at the opera, in the cafe, but to no avail. 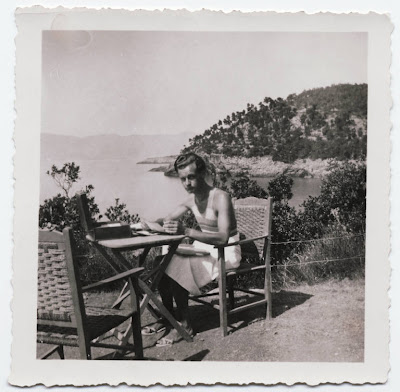 James Lees-Milne, in Lerici, working as Lloyd's secretary
There are so many more I'd love to share but fear I shall ruin your own personal discovery.  In fact, I had a difficult time narrowing down the entries!  Friends with so many we esteem (Vita Sackville-West, Harold Nicholson, Rupert Hart-Davis, Robert Byron) he writes with such wit, even over the tragedy, of a man who has lived the world.  Unfortunately Another Self is out of print in the States, but it is still available here.
(Side Note:  How amazing are these pictures?  I found them in my frantic search at Yale's Beinecke Rare Book Library...supposedly they are in possession 30 boxes of Lees-Milne's correspondences, records and photographs.  If this interest intensifies I may have to make a pilgrimage!)

Editor's Note:  Thanks to an anonymous comment for pointing out to me that Lees-Milne worked for NATIONAL Trust, not LANDMARK Trust.  Such a silly mistake on my part.  Apologies!
Posted by DM at 8:54 PM

Recently I read his diaries for the years 1944-45 in connection with my posts about Roderick Cameron. Lees-Milne is a fascinating character.

I'm desperate to read those diaries now. What lives one might lead! And be photographed in black and white while you're at it! The story about Theo is amazing - thank you.

Blue- I think that will be my next read of his. 'Another Self' ends in 1944...I going straight away to read your posts on Roderick Cameron.

Nick- I think you will like it. There is another story that finishes the story that is absolutely heart-breaking. Goodness, I'm starting to well up.

Isn't he marvellous? I have lots of his books and love them xx

Indeed a fascinating character---haven't read the early years---loved his later diaries, and his stories of the National Trust. Quite a bunch, those pre-war boys.

Wonderful photographs, none of them all that familiar and I've got
all of J L-M's diaries and the marvelous biography by Michael Bloch.
Interestingly, according to his biographer, James took liberties with
facts whilst writing Another Self and regarded the book as a sort of
enhanced, imaginative picture of his past. In other words, it was a mixture
of fact and fiction.

Unlike several of the previous commenters, I have never read his work - but you have certainly piqued my interest. After I make some headway into the ever mounting pile of books next to my bed, I will be sure to look him up!

Christina- He really is! I can't wait to read more of his stuff!

DED- They were a great bunch. With all my might, I wish I were a pre-war boy. Shame so many died in the War...

Toby- I'm dying to get that Michael Bloch book! Good to hear another positive review. James does mention some of his stories are half-truths, but seeing as he was in his 60's writing in about his youth, I'll take it. You should hear the shite my grandfather would make up!

Quintessence- I think you will like it, be sure to had it to your pile!

Lee-Milne worked for the NATIONAL Trust, not the LANDMARK Trust. The are altogether different organizations. The National Trust (Beatrix Potter was among its founders) works to preserve open land and significant historic houses and estates. The Landmark Trust (http://www.landmarktrust.org.uk/) works to secure the future of much smaller, generally unconventional or idiosyncratic, buildings by restoring and renovating them for use as short term vacation rentals. Among those where I have enjoyed a few days are the Wardrobe in the Salisbury Cathedral Close, the Mackintosh Building in Comrie, Scotland, the West Banqueting House in Chipping Camden, the former home of British Poet Laureate Sir John Betjamin in Cloth Fair, London, Edale Mill,, a renovated cotton mill in the Hope Valley of Derbyshire and Knowle Hill, a wonderfully charming remnent of a much larger house in Ticknall, not far from Calke Abbey (which does belong to the National Trust)

Thank you so much for pointing out my blunder!! I feel so ashamed! I always mix the two up and for some reason obviously didn't edit enough to notice my mistake. Thank you!!

and it's LEES-Milne not LEE-Milne.