A shocking turn of events... 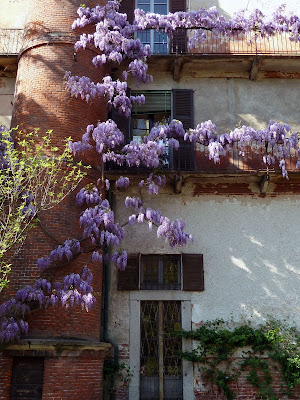 I know it's been lightyears since I've written, but I beg your forgiveness.
Two weeks ago exactly I woke up to a sunny day and a free morning.  I had an appointment at one but would spend the morning working out, cleaning and going to the market to buy some verdure.  After my run (side note: two months into the trip I noticed I had two panzeroti growing on my hips and a timballo growing on my mid-section, so I made a dramatic change in eating habits and exercise) I felt refreshed and that life couldn't get any better.  I was planning a trip to Dubai to visit a friend on another friends discount airline ticket.  It would allow me to leave the EU and renew my tourist visa for another three months.
or...
so...
I...
thought!
Sbagliato!  As of April 2010, the EU changed their law for non EU visitors.  With a tourist visa, one can only stay in the country for three months within a six month time period.  Was this true I wondered?  Everyone said no.  That night at dinner with friends, all were optimistic.  Even I thought, maybe I can get someone in two weeks to sponser my work visa.
Friday morning was even worse.  I visited the questura, or police station, in Varese (if any of you know the questura, you know it's the worse place on the planet) and they assured me even if I was hired, I couldn't return for another three months.  The only other option is a student visa.  But still only after being in the US for three months.  A call to a lawyer, same news.
DEVASTATION and tears on the street
But instead of driving off a cliff on the way home which was my original intention, I decided to look on the bright side of things.  Since the shocking news, I have been like mad emailing the Consulate in Boston, enrolling in a language school in Milano, and giving my CV to every English school in the province, thankfully securing work for when I return in September and looking for summer work back home.  I got on the plane on Tuesday morning and was still talking to my future employers.
That in a nutshell have been my past two weeks.  Sorry for the 'dear diary' entry, I promise to return to regular programming here on.
(Image above: About a month ago the wisteria were in full bloom along the side of the Pinacoteca di Brera)
Posted by DM at 1:03 PM

Hello:
What a worrying sequence of events. The laws of staying in, working in and travelling through countries seem to get ever more complicated and paper-driven. Almost enough to make one stay at home.

We do so hope that your plans are now more settled and that we shall hear from you again soon. The Wisteria is magical!

You have been missed dear DH! Sorry to hear of this rather disruptive turn of events and hope your world brightens soon!

Thank God you skipped the cliff. Milano needs you, even if she must wait 'til September. xxoo

Well, that's an annoying little glitch indeed (I'm in an understated mood today). What a silly country to not want you there for three months in service of some odd rule.

On the other hand, there are worse things than a summer on Narragansett Bay.

J&L Hattatt...it's not easy for anyone these days! Other than those with duel-citizenship.

WE...So glad to be back, I missed all my favorite blogs. Curse slow internet connection.

Aunt V...Milano waits for me, where I eagerly wait for you to return! :)

DED...I think it's a blessing in disguise. Coming home to Watch Hill summer season = hard work and $$ for next year. And maybe some more traveling around New England.

Dear Daniel, all this red tape with travelling is such a pain. Hope it works out for you.

The wisteria is stunning, I wish it lasted longer it's so beautiful xx

Enjoy your blog. One small criticism: "light year" is a measure of distance not time.

Thanks for the comment! I'm keeping it whether it's correct or not. I don't think I would use it unless it was to be comical.

I admire your pluck! or as they said in the 70's -I know I was there, keep on truckin'
PGT