Meet me in the stacks 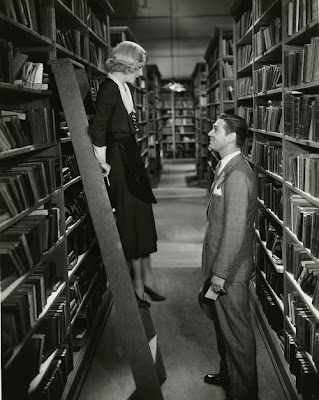 Don't you love this picture of Carol Lombard and Clark Gable?  They seem so very much in love.  I went through a huge Carol Lombard phase this winter (blame Instant Netflix) and was so interested to find out about their relationship.  They were indeed very much in love, but only married for two years when she died in a plane crash.  Gable was inconsolable and devastated -according to wikipedia- and enlisted in the army,  dedicating himself to a suggestion she had made before her death.
I think the fact that the two are flirting in a library makes it even more perfect.
Posted by DM at 1:00 AM

Having spent many hours in the stacks of Sterling library at Yale as an undergraduate there, I always found them to be deliciously sexy. Apparently so did Ms. Lombard and Mr. Gable...

and be sure to discover their some of their very salacious practices-they were blissfully in love in every way. a beautifully crafted short story Daniel-I loved it. pgt

What a great photograph! Nothing sexier than a library in my book (sorry, couldn't resist). Carole Lombard had one of those amazing early Hollywood faces....beautiful and funny....one of my favorite combos.

Reggie- I'm so envious you went to Yale! I've never been to the Sterling library, but I'm sure it's as sexy as can be!

PGT- Can't wait! They were so fascinating!

WE- I think if I could change my face or make it more perfect, I'd want it to look like Carol Lombard's.