The Summer Book by Tove Jansson 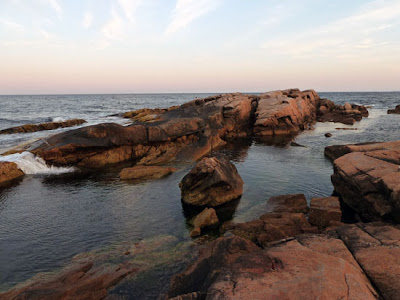 A couple weeks back I was perusing the New York Review Books- which seem to be in joyous amounts at Symposium Books in Providence- for Wish Her Safe at Home by Stephen Benatar, a review I read at Stuck in a Book.  Regrettably it wasn't there, but I did find another on Simon's list, The Summer Book by Tove Jansson.  I'll give it a go, I thought, I dare say it is summer.
Now, I'll be honest, it took me about 75 pages to get into it, and at 170-odd pages that's almost halfway through, but now that I'm finished, I haven't been able to stop thinking about it and actually fancy a reread.  A series of short stories (I hate the word vignette, although it's probably a more accurate word - maybe it's just how so many people seem to use it wrongly) about a grandmother and her granddaughter living on a island for the summer off of Finland.  All of the stories have an almost ethereal feel to them, like foggy memories put into writing, which I think is what I found divergent to what I have been reading lately.  It took me a while to get into it, but once I did I didn't want loose that distant feel.  She has a bit of a Virginia Woolf-style to the way she writes, in fact, when I was reading it I kept on thinking about Mrs. Dalloway.  Did anyone else find this or am I just imagining things? With it, brought back vivid memories of my childhood growing up on the coastline in Rhode Island.  Playing in the woods until our legs were covered in scratches.  Digging for clams out on a sandbar during low tide.  Swimming off of docks that weren't ours, then hiding from the owners behind rocks, so we wouldn't get in trouble.  Then ending the night in absolute exhaustion, passing out, face in pillow.  Sophia and her grandmother's experiences were the same and Tove Jansson was telling us about her own childhood through them.  Our Finnish family friend (alliteration much?) often tells us how similar the New England coastline can be to that of Scandinavia, which I think is why I related so much to the descriptions of landscapes and their mindset.  I wonder if it is something about having to survive such brutal winters desperately waiting for a too short summer that makes us similar?
When a rich businessman builds a house on a nearby island, I could feel for them, watching their precious views being disrupted by the big, modern and ugly:
A business built a house on Blustergull Rock.  At first, no one mentioned it.  They had developed a habit, over the years, of not talking about painful things, in order to make them less painful.  But they were very much aware of the house.
People who live on islands are always letting their eyes glide along the horizon.  They see the lines and curves of the familiar skerries, and the channel markers that have always stood in the same spots, and they are strengthened in their calm awareness that the view is clear and everything is in its place.  Now the view was no longer clear.  It was broken by a big square house, a new and threatening landmark, a deep notch in the aspect of a horizon that had been their own for a very long time...
﻿
I was really moved by The Summer Book, not only for what I related to but also the emotional connection between the two leading ladies.  With gorgeous imagery, Jansson throws us back into her past and most importantly helps us to remember our own!  Gracious, I loved it.
Side note:  Images are mine taken of a lovely tidal pool I've gone to forever.  It's one of the few places undiscovered (mostly) by tourists and where one can spend the day in the crystal clear water without a soul around you.  It fills up so much you have to dive down to touch the bottom - then empties until it's only ankle deep...something that has never ceased to amaze me.  I won't tell you here where it is, but if you come for a visit, it will be first on my grand tour.
Posted by DM at 3:31 PM

"People who live on islands are always letting their eyes glide along the horizon."... i love this! make me think about the characteristics of people who live in a certain area.

What a great review. I live on the coast of New England and am just about to delve into this book. As you say, it is summer, after all. Thanks so much for your enthusiasm. We at Goodreads.com are going to be reading this title together, if you want to join us. Can't wait now!

Sarah- the whole book was filled with poignant little phrases like that! I think you'd like it!

Trish- Thank you! Especially being a coastal soul, I think you'll love it. let me know what you think!