I've been holding off on doing this post. I know none of you care, but let's talk about my garden!
It looks just like this!!! 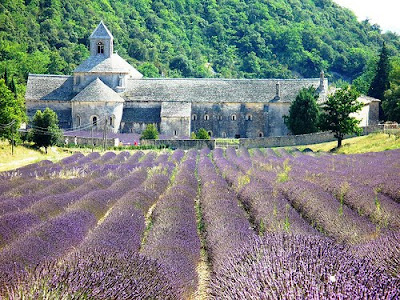 (Not at all actually)
The terracotta urns are doing quite well, the moss has taken and the ferns are giganticus.  The dichondra took well too, and is oozing its way down to the ground.  The escargot rex begonias look like an under-the-sea creature! A friendly old fella (ask ANYone questions!) told me to prune my rose bush RIGHT NOW, back in early May. I want to send him a bouquet of my most bodacious looking roses.  What a difference!
On the "potted eating things from seed experiment", the mesclun grew like a pubescent boy as did the nasturtiums, but the basil is still lagging behind.  I haven't given up, but let's say there is a bigger, bolder bought basil on the other side of the deck away from view.
The perennials are quite well, thank you, but are such independent thinkers I let them do their own thing.
I also let the wild rose go a little crazy, as with this viney thing, which now is blooming the most beautiful flowers!
-Drum Roll-
Reader(s) of this blog, know how I've bitched and moaned about my lavender not growing.  I'd ask many an experienc'd gardener, and they'd grab their stomachs, roll their heads back and guffaw at me.  "Lavender?  In New England?!  Nearly impossible."  Some were friendly and say add lime.  I read to add gravel.  I did all this, along with singing songs at bedtime, playing cat's cradle and watering with my salty tears.
But I felt it was no use.  Until...I came back from my trip.  I threw my suitcase down, ran outside and looked down on it.  It's no use!, it looked all ratty and grassy.  And yet I wonder, I thought.  Ratty?  Actually rather verdant...and that's not grass, those are the stems to the THOUSANDS (OK tens) of buds!!!  Not only that, the lavender hath grown in girth and might!  It's....a BUSH!
So that's that for now...bear with me.  As aan amateur gardener any little improvement is so exciting for me.
And for the record, when I have children, they will be the only smart ones in the Universe.
Posted by DM at 6:01 PM

Lavender is tough in New England, no doubt about it...but any is better than none, yes?

Amazing what a shower of salty tears can produce dear Daniel-Halifax. Sounds like your garden may rival the one in the photograph...perhaps you can tease us with a photo or two?

LBV...Thank you!
Lenny...That was for you.
DED...I'm hoping there will be lots and lots and lots! Ill send you a home made soap if all ends well.
W.E. Indeed, salty tears are a cure all for many things. I promise some photos soon. You see, I still you real film, so it takes me a bit longer than normal.

Real film? That's so elegantly old fashioned. I too nearly 300 pics today, a luxury I could never afford before the digital age---one after another for future posts.

haha! I think it does...i guess I'm a dichondramainiac took. I like to say it with my eyes rolled back and half closed in a husky Bacall manner.

I really enjoyed reading that. I bought some lavender a few weeks ago but it's been so hot here the poor things are frazzled. I feel very guilty that I didn't water them enough and will have to contend myself with replacing them and making more effort with the next batch... xx

Someone told me not to water them ever, but then I wonder, isn't it in the rainy UK where lavender is the most beautiful?